How I React To TV Shows

HOW I REACT TO TV SHOWS – Superwoman | Reaction 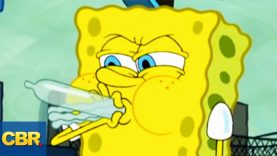 10 jokes in kids movies that were made for adults
Subscribe to our channel: https://goo.gl/wMuSDD
—————————————————————————————–
Description:
Since children don’t make great scriptwriters, every show that has ever been intended for a younger audience was written by adults. Whether it’s from the tedious nature of the job, or to make their co-workers laugh, inappropriate humor has been discretely placed in kids entertainment since they started making it. Some are obvious, smacking you in the face with its suggestiveness. Others are subtle, only intended to be caught upon multiple viewings, or maybe not at all. How these jokes got past the censors, we’re not sure. One thing is for certain though, as we get older, watching the television shows or movies we enjoyed as child is usually an eye-opening, and sometimes cheek blushing, experience. Put the earmuffs and blindfolds on the kiddies, it’s time for 10 Hidden Adult Jokes in Popular Movies and TV Shows.

How I React To TV Shows