HomeGadgets5 Of The Best Personal Transport Gadgets!
AUTO NEXT

Banana Gadgets Put to the Test

5 Dog Gadgets You Should Have

5 Of The Best Personal Transport Gadgets!

A Day With Colin Furze – The Gadget Show

5 Gadgets Every MAN Should Have

5 Of The Best Personal Transport Gadgets! 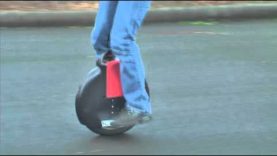 So personal transport gadgets have recently become the next big thing and it gives us a clue to what we might expect in the future.

My guess would be that one day it will completely normal to see people whizzing through the streets on some high tech gadget, hopefully one that actually hovers.

But if you don’t want to wait, there are some pretty decent gadgets available right now.

As always I want to give a big shoutout to viewer The Driver for suggesting this video.

Check out my second channel More5! for funny, weird, interesting news, along with the latest trending topics within the YouTube community.

It is gyro-stabilized so its not that difficult to ride, and can actually be pretty useful.

To me it is more of a fun gadget than an actual vehicle one would use for their daily commute, but I may be completely wrong.

You would love it in a big open space, like a college campus, riding from class to class but probably hate it on a rainy cold morning, in rush hour, with hundreds of people to dodge and avoid.

And lets face it, you’d have to have some pretty big balls to take it on the road with cars driving right by you.

So while it looks really fun to ride, and has its uses in certain situations, I doubt it will ever become a mainstream method of travel.

This bit of tech blew up in popularity thanks to many celebrities, youtubers, and other social media stars using them in their videos.
It was a must have product until it blew up again.

Only this time they literally started blowing up, making them obviously dangerous.

This caused a huge backlash, many large retailers like Amazon banned them from sale, airlines refused to carry them on flights, and sales went down drastically.

They are now viewed as dangerous, and even if I purchased one now from a respectable company, I would still be a bit nervous leaving it to charge overnight.

If I owned a hoverboard company, I would change the way my boards look, to make it appear as a new version and rid my boards from the bad reputation.

They are no where near as popular as the hoverboard, but that’s probably to do with the fact they are much more expensive.

This is a proper vehicle, you can use in your everyday life.
Don’t take my word for it, just hop over to Casey Neistat’s channel and watch him blast through the busy streets of New York on a daily basis.

In fact lets face it, Casey Neistat is one of the main reasons the boosted board has become pretty famous and you can see their appeal, they can achieve speeds of up to 22mph, you control them with a remote in your hand, and can travel you a good 8 miles on a single charge.

The walkcar is basically a tiny laptop sized platform with 4 wheels and an electric motor.

It works by shifting your weight in the direction you want to go in.
Whats really cool about this tiny gadget is its specs.

It can fit in any backpack and weighs only about 2.5kg which is about 5 and a half pounds.

Secondly it can reach speeds of about 6.2 mph.

Thirdly a full charge can give you about 7.2 miles of range.

However there are a few downsides.
I can imagine its tiny wheels wont be useful on anything that isn’t a flat smooth surface and its price will be about $800.

Electric bicycles are nothing new.

They have been around for years.
They are still very expensive compared to a standard bike.

If you forget about the price and just see it for what it is,
Its a vehicle which is easy to control, easy to steer, easy to brake, and can move you at some very decent speeds.

The only downside is bikes aren’t the most portable vehicle.
You still have to chain them up, and with the rise of bike thefts in most cities, you can easily lose a couple thousands dollars in a matter of minutes.

Even if you installed some kind of key ignition, its still a bike and the thief can just pedal away.

However despite that, out of all the personal transport gadgets out there, sometimes the old fashioned way is still the most effective.

A Day With Colin Furze – The Gadget Show