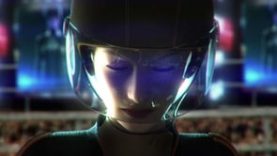 The bands intention for the video was as follows “We always wanted to do a video that was an homage to video games in a way, but we also didn’t want to look back to past video games. That would be too boring, I think. But we wanted to combine that with criticism of where the Internet has taken us, basically.”

“I think you have to watch it a couple of times to see all the little details, for example we used the imagery of like – we call it digital Maoism – the thing where you feel like all the creative people are being totally exploited; authors, writers, film makers, photographers. It’s like the machinery takes all this stuff and doesn’t really give enough back to make it fun. Basically what looked like a progressive and exciting future has become almost like stagnation now. So we tried to criticise that with the video.”

iTunes
www.itunes.com/atariteenageriot (that points to all the band’s releases on iTunes so works internationally)
and for modern liars (uk)
https://itunes.apple.com/gb/album/id911309653