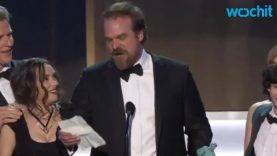 “Stranger Things” is the next super hit from streaming service Netflix. It scored major victories at the Producers Guild Awards and Screen Actor Guild Awards.
Actor David Harbour is teasing the second season in a new interview with Vanity Fair magazine.
Harbour said “I got the first script of season two, and the first five minutes I was on my feet going, ‘Yes! Yes!’ I really do think it’s going to be thrilling.”