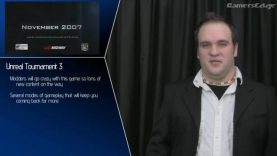 Two weeks later and already another release? I guess we aren’t doing too badly this time around. In this release of Gamers Edge we take a look at another 3 games that came out this 2007 holiday season. Noah finally gets to play his first Unreal game and gives you his unfanboyish opinion of the “Epic” game. Next Noah reviews the Pixar-like game Team Fortress 2. In fall 2006 Epic and Microsoft brought us Gears of War on the Xbox 360 but now we finally get it on PC … but is it worth it?

I am looking for a guy for sex