Top 10 TV Shows Based on a Movie 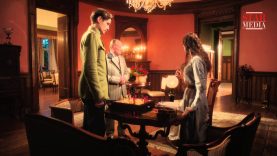 Watch free russian tv shows with english subtitles
All episodes: https://www.youtube.com/watch?v=3Vy0zxCQ5Dg&list=PLwGzY25TNHPBFg9VZNXIVqH_6HYR7WhP_&index=1
The eve of World War I. An Uhlan regiment stations in a remote town in Ukraine. The officers in the regiment spend their free time in a miserable local tavern, killing time by playing cards. Young Lieutenant Aleksandr Grigoryev is even ready to play Russian roulette from boredom. But suddenly he meets Her… Nina, niece of magnate Stakhovsky, immediately wins his heart during their first meeting. The lieutenant is conquered. In love, he seeks invitation to dinner given by Stakhovsky where he meets his daughter Lera… The dinner is nearing completion and Aleskandr, who has danctd all the evening with Nina, suddenly remembers he has never asked the young lady of the house for a waltz. Wishing to rectify his omission, he asks her for a dance, but is sharply refused. It turns out that Lera is half-paralyzed and is condemned to the wheelchair for the rest of her life. To make amends, Aleksandr sends to Stakhovsky’s daughter a bouquet of gorgeous roses. The answer comes immediately: the young lady is waiting for his another visit…

Watch movies and TV series for free in high quality.
Explore a great collection of documentaries.

With these free online Russian language movies you will learn Russian easily.
Subscribe for high quality movies and series on our channel.
Enjoy Watching!