Motoko Kick It! – By Motoko Games 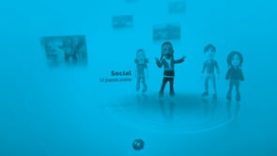 The time was spent exploring many ways that a new menu system could allow users to browse and navigate game libraries, music, movies and TV shows. Oh, and play games too. In addition to the menu systems, we dreamt up an immersive 3D environment for users to explore the latest games, events and online activity within the XBOX Live community.

These examples represent one of many concepts that we worked on. We are happy to have contributed to the evolution of the XBOX console UI. The new “XBOX Experience” debuted in November, 2008.