TV shows that will get you STABBED in PRISON 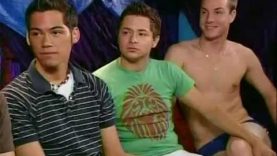 NEXT was a dating “reality” series on MTV. Most of the episodes were boy/girl dating, but a few times an episode had gay people. The people were real, not actors, but writers were on hand to tell them what to do and say to create drama. It was intentionally awful so that people would watch.

TV shows that will get you STABBED in PRISON