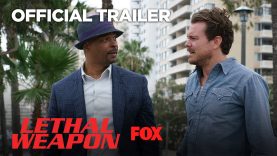 The iconic cop duo Riggs and Murtaugh are back in the all-new FOX Series LETHAL WEAPON. Don’t miss them as they work in a crime-ridden modern-day LA.

Combining action and drama with friendship and humor, LETHAL WEAPON reboots the hit movie franchise, as it follows classic cop duo Riggs and Murtaugh, who are working a crime-ridden beat in modern-day Los Angeles.

Grief-stricken after the loss of his young wife and unborn child, ex-Navy SEAL-turned-detective MARTIN RIGGS (Clayne Crawford, “Rectify”) moves to California to “start over” at the LAPD. He’s paired up with ROGER MURTAUGH (Emmy Award nominee Damon Wayans, Sr., “My Wife and Kids,” “In Living Color”), who’s just coming back to the job after a near-fatal heart attack. Riggs’ penchant for diving headfirst into the line of fire immediately clashes with Murtaugh’s prudent, by-the-book technique. It’s clear from the moment they meet, this partnership could be lethal. But during their first case together, Riggs drags Murtaugh on a high-speed chase culminating inside the Long Beach Grand Prix and into a seaport shootout with drug dealers – and despite his protests, the older cop feels more alive than he has in years. Meanwhile, Riggs gets a glimpse of why Murtaugh is so determined to get home safely at the end of each day – he’s got a family and a newborn baby of his own. By the time their investigation ends, Riggs realizes he may have found something worth living for – a partner and friend like Murtaugh. And even Murtaugh figures this arrangement might just work out after all. If only Riggs doesn’t get them killed first…