Bit Museum #3: The Wizard of Odyssey 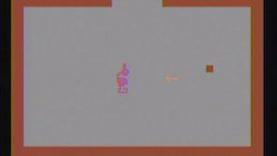 I don’t have an Atari 2600 anymore. I’m pretty sure my parents threw it out when we got a Super Nintendo. All the sampled footage in Persistent Artifacts comes from a Jakks Pacific Classic Atari 10-in-one joystick : ten games packed into a single controller, including the first role playing console game, Adventure! .

While my body, mind, and self-perception changed since my first affair with Adventure!, its code laid dormant, neither growing or changing, so that when I returned to the game after a decade’s absence I encountered a shell of my past identity. I remembered how my body used to fit it: I was a homunculus inside the mind of a tiny rectangle, exploring the vast mazes of a 4kb Atari cartridge. Adventure! is the first video game I remember playing, and is the first time I experienced and became aware of the multiplicity of identity. I was to become that little square and my disordered, confusing body was displaced as I grabbed the controls and became a tiny, perfect rectangle. The form I took was entirely abstract. I made it a humanoid; I made it sympathetic. By playing it, I authored it.

Most experiences enjoy a brief period of clarity before facts and emotions dissolve, disperse, and blend with other recollections.

Static and dust accumulate into abstraction, allowing memories to be painted to fit. Even the VHS tapes of my childhood, sampled within, have aged like my memories; Adventure! doesn’t look a day older. These technologies of my past, which shaped the way I formulate memory, have avoided dissolving into fantasies; I can return to them and replay the past in which I came of age. And while my body progresses, differentiates, and degrades with time, the beings I have embodied sit stubbornly unchanged, waiting to be dusted off ( or reconfigured) and re-explored.

Using Adventure! for a piece of video art is an homage to the early lone Atari developers who created games that shaped childhoods, but many of whom
remain unknown.

The author of Adventure!, Warren Robinett, refused to be forgotten. Out of spite for Atari’s policy of not crediting developers for their work, he hid his name in a secret room in the game, creating the first video game Easter Egg. The hidden signature can be revealed by using a certain item in a specific room in the game . After submitting the final code for Adventure!, Robinett quit Atari. Thus the title Indenture for Craig Pell’s extensive remake of Adventure!.

This assertion of authorship was a crucial moment in the history of video games as a medium. These developers knew they were making works of art, and wanted to sign their canvases, but the corporate structure had no interest in crediting the designers, nor allowing them a share of the profits from the games they made.

My numerous manipulations of Adventure! are sort of post-facto Easter Eggs I have imposed upon the game in order to communicate the effect it had on my identity and my perception of my body/self. I reclaim and replace my memories, giving them the looseness they have inside. I make my rectangular avatar breathe, get lost in a blood vein, and enter a castle that transports us out of the television. I play the game theatrically to endow the abstracted avatar with a childlike innocence, fear, and curiosity. I create events that allow the pixel to come of age, to be gendered. I take the authored, and reconfigure it, update it, force it to live through me as I lived through it.

Bit Museum #3: The Wizard of Odyssey