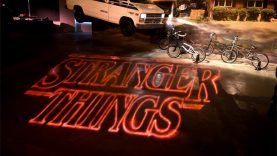 Exactly one year ago ‘Stranger Things’ was released on Netflix. In honor of the show’s one-year anniversary, the show’s creators will be releasing the show’s soundtrack on cassette tapes. This makes perfect sense, because ‘Stranger Things’ definitely was made through the guise of 1980’s nostalgia. The show’s soundtrack was scored by Michael Stein and Kyle Dixon, and the cassette tapes will be released in July 2017. The cassettes will be sold through Urban Outfitters clothing outlets.