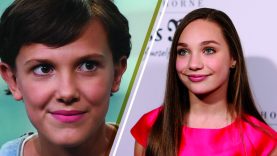 Millie Bobby Brown and Maddie Ziegler are on pace to be Hollywood’s next BFF couple – we’re talking Kendall Gigi status! But their first ever sleep over didn’t go exactly as planned. The Stranger Things star stopped by the Ellen show this week to of course chat about her breakout role as 11 in the Netflix series. but Millie also talked about her best friend, reality star Maddie Ziegler. The young stars recently had a sleep over – and it was 12 year old Millie’s first one! “She private messaged me on Twitter,” the actress told Ellen. “I’d never been on a sleepover before and she was like, ‘do you want to come over?’ So i’m like sure, ok!” Sadly, Millie didn’t dish on any details but we’re sure the girls did normal sleepover stuff. Tweeting cute boys, painting nails, staying up all night. But then the event took a disastrous turn. “So I go over there,” Millie continued. “And at 3 in the morning the fire alarm comes on. We all had to get rushed out of her apartment building and I’m crying because I’m like, my first sleepover’s ruined. So yea, we’ve been through a lot.” Well, a lot for a couple a 12 year olds. Give it a couple years. Especially because these BFFs are in the major spotlight. Millie is getting major buzz for Stranger Things. Unfortunately, however, the young actress wouldn’t reveal any spoilers on season two – unlike this major moment from this Sunday’s Golden Globes. Millie and the Stranger Things cast made a special appearance. Was it just a joke, or is Barb really still alive? And how cute are Maddie and Millie? Let us know in the comments below.