we need a WTF

we need a WTF bu

WTF ARE THESE SCOOTER KIDS 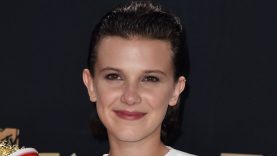 In a recent interview 13-year-old actress Millie Bobby Brown revealed that not only did she audition for the role of Laura Kinney, aka X-23, in “Logan,” but she considers it her best audition to date. There are similarities between the role she plays on Netflix’s hit series “Stranger Things” and the role of X-23 in the superhero movie. Both are young kids being used by the government for their special powers.