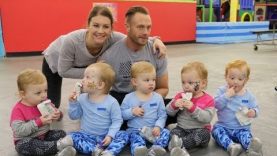 Will ‘OutDaughtered’ Return For Season 4? The Busbys Don’t Need A Reality Show To Keep Them Busy

TLC has turned confessional reality TV shows about big families into major trend, and OutDaughtered is the perfect mix of all the best elements in that genre. Will OutDaughtered return for Season 4? It has an absurdly challenging parenting situation, a charming mom and dad, an older sibling forced to be wise beyond her years, and a quirky grandma. But as the show’s summer season comes to an end on Sept. 11, there’s no news on its future.

While OutDaughtered has yet to be renewed by TLC, there’s nothing about the third season’s performance that suggests that the series will be cancelled, either. And given the show’s history, it’s hard to predict when OutDaughtered Season 4 would premiere, if the show does get that order.

OutDaughtered premiered with a short, four-episode season in May of 2016, and the Bubsys announced the show was renewed for Season 2 in August 2016. The second season premiered in fall 2016 and ran for 13 episodes, until January, then was immediately renewed in late January and took another six-month break before returning in July. If that pattern continues, then OutDaughtered could return as soon as February 2018. Given that the third season premiere was the highest rated episode of OutDaughtered ever, according to The Futon Critic, there’s yet another good reason to expect the series to be renewed and to return soon.