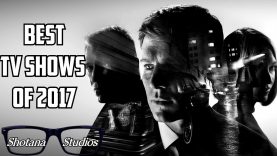 Welcome to Delistember!
Today I am gonna talk about one of the greatest American past times… Television.
Well 2017 definitely raised the bar for TV shows, and this time it was pretty hard for me to narrow it down to five. So without further ado let get to it!

What do you guys think of the final list? Do you agree? If you disagree what shows did you fall in love with this year? What is your Top Five? Also you may be wondering, why not Top 10 ? I can, but it would be just repeats of last year, as well TV shows take a lot of time to get through, so, I can only watch so many. Time to dusk those old TVs lets get to binging some new shows

Nothing but Spoiler free here.

Film clips/trailer footage and poster graphics used here per fair use, Copyright Disclaimer Under Section 107 of the Copyright Act 1976, allowance is made for “fair use” for purposes such as criticism, comment, news reporting, teaching, scholarship and research. Fair use is a use permitted by copyright statute that might otherwise be infringing.

where can i buy dilantin

How To Get More Deep Sleep Starting Tonight?

where to buy nexium