10 TV Shows That Were Doomed From The Start

SnG: What Were Our Favourite TV Shows Growing Up? Ft Tanmay & Rahul | The Big Question Ep 38

The 5 Best TV Shows of ALL TIME Ever. 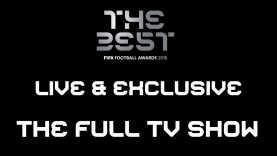 Football fans are at the heart of FIFA’s new award show. Not only did they take part in choosing the winners of the individual awards for the first time ever, they also had a recognition of their own. Borussia Dortmund and Liverpool supporters were chosen by other football fans from around the world and received the inaugural FIFA Fan Award for their unified singing of You’ll Never Walk Alone in memory of those involved in the Hillsborough disaster.

Public voting on FIFA.com also decided the most beautiful goal of the season, with Mohd Faiz Subri taking the FIFA Puskás Award 2016 trophy back home to Malaysia.

The team of the year
The votes from over 45,000 players around the world decided the FIFA FIFPro World11, the football players’ own selection of the dream team of 2016. Here is the line-up:

Paying tribute
Atlético Nacional were chosen by a panel of football experts as the deserving recipients of the FIFA Fair Play Award 2016. The Colombian club displayed humanity and compassion in face of the tragic plane crash that befell Chapecoense – the Brazilian club they were to face in the final of the Copa Sudamericana and to whom they insisted that the cup be given.

The evening also featured an homage to Alessandro Rosa Vieira, known more popularly as the “king of futsal”, Falcão. Following his retirement from the national team after the FIFA Futsal World Cup Colombia 2016, the Brazilian legend was lauded with the FIFA Award for an Outstanding Career.

The award show was held at Zurich’s TPC studios and presented by Eva Longoria and Marco Schreyl. It featured performances by ‘vocal play’ pioneers Naturally 7 and English singer-songwriter Julian Perretta.

Key statistics:
The individual winners of The Best FIFA Football Awards 2016 were determined through a combined voting process, in which 50% of the decision was based on the votes of captains and head coaches from national teams all around the globe. The other 50% was split between an online public ballot of football fans, and votes by a select group of media representatives from all around the world.

The voting procedure for each of the awards was supervised and monitored by the independent observer PricewaterhouseCoopers (PwC) Switzerland.

And the details from the awards decided by public voting:

For more information on the show, the inspiring background stories and detailed voting results, visit FIFA.com.

SnG: What Were Our Favourite TV Shows Growing Up? Ft Tanmay & Rahul | The Big Question Ep 38