WTF IS HAPPENING / #IHATERUMBLE IN THE COMMENTS 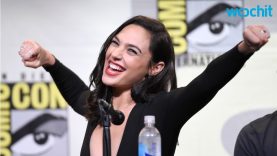 Last weekend at Rhode Island Comic Con, Millie Bobby Brown, the breakout star of Netflix’s original series Stranger Things, crashed a panel headlined by Wonder Woman star Gal Gadot, who was the breakout star of Warner Bros.’ Before she was Wonder Woman, she was Diana, princess of the Amazons, trained to be an unconquerable warrior. Patty Jenkins directs the film from a screenplay by Allan Heinberg and Geoff Johns, story by Zack Snyder and Allan Heinberg, based on characters from DC Entertainment.