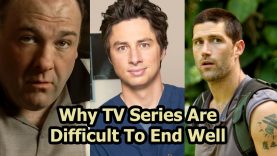 TV series can be difficult to end well, and by well I really mean in a way that is narratively satisfactory and has emotional payoff, or resonance, for its long term audience.

Many times people become very attached to TV series – they do afterall spend much longer with those characters than the characters in a film or even a franchise, but often too the ending of show can be deflating, abrupt, or even downright insulting.

Why does this exist more in TV than other medium? Well frankly the nature of TV is very different to either film or narrative fiction.