The Evolution of Video Games Consoles

Crazy About Gaming? Video Game Maniac to the Rescue! 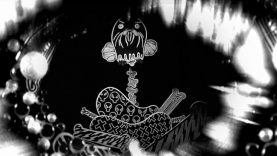 The video for “Hoshi Neko” was co-directed by Ruby Kato Attwood (singer in Yamantaka // Sonic Titan) and Emily Pelstring (animator, video artist). The narrative makes a guess about what might have happened to Ruby’s lost cat, Hoshi, after he embarked on his lone adventure.

The artwork and puppets were hand-made by Ruby. Emily shot and animated them on 16mm film on a home-made multi-plane animation stand, and added digital effects to the transferred footage.

The process of making this video involved a lot of idea-exchange, tedious work, excitement, and several bags of googley eyes from the dollar store.

*Some of the “space junk” and the “heart” in Hoshi’s body were drawn by Alaska B of YT//ST. The star at the beginning and end was drawn by Emily. All other art by Ruby.