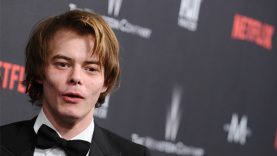 Stranger Things star Charlie Heaton is in talks to join the cast of New Mutants According to The Hollywood Reporter, Heaton – who played social pariah Jonathan Byers on Netflix’s Stranger Things – is in negotiations to join the X-Men spinoff film as Sam Guthrie, the mutant also known as Cannonball.